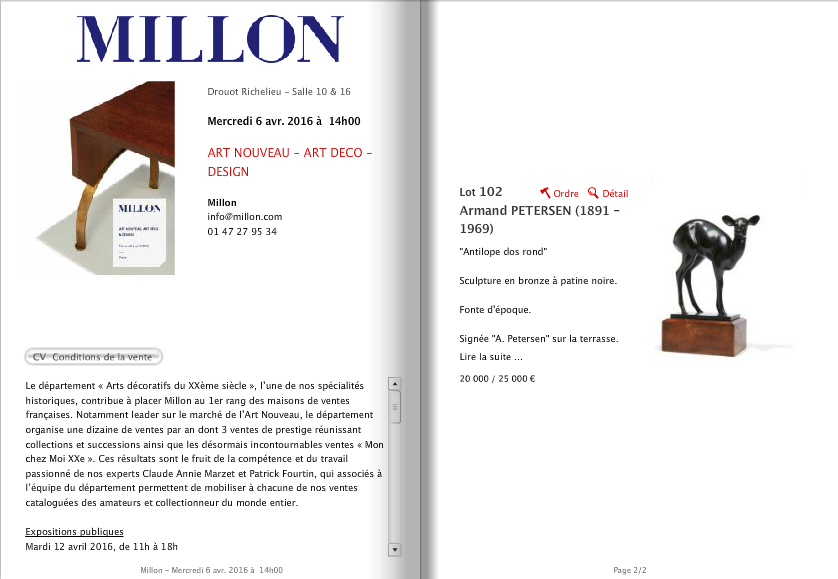 The birth of the “Small Dromedary” 1/8 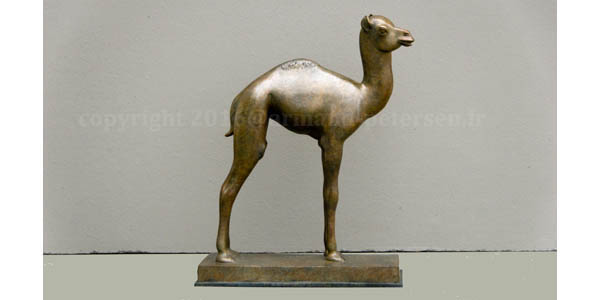 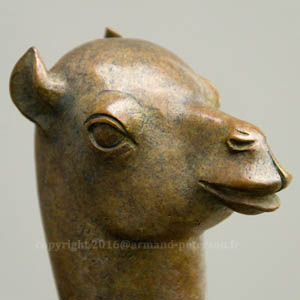 After several weeks of waiting and attention here birth of this “Small Dromedary”. A very large thank you with all the team of the Rosini foundry which knew to reproduce the emotion and the small malicious glance that had wanted Armand Petersen. 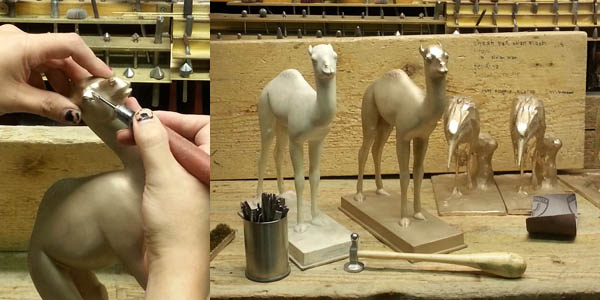 Last negligible blows of the gravers to affirm to him its artistic character, its contours and modelled for a reproduction in any point faithful to the original plaster. Cheer and thank you! 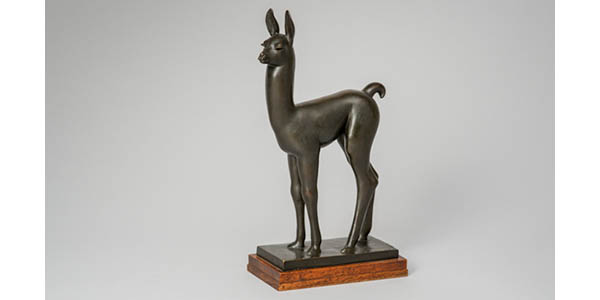 Sculpture in the round bronzes some (34 X 20 X 7 cm). Signed and seal of the Bisceglia founder in bronze on the terrace. Technique of lost wax. Rest on a base out of wooden. Source: The Old Fountain, Antiquities S.A, Lausanne. 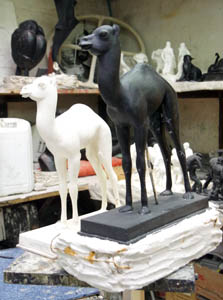 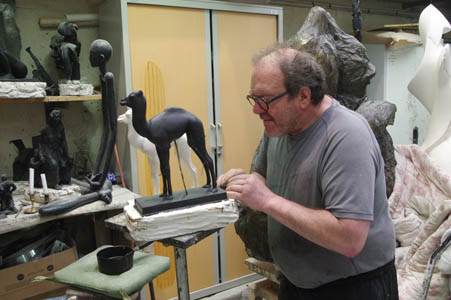 Here waxes some beside its original plaster. A small control and Mr. ROSINI affix his seal. We expect now impatiently the next stage, the cast iron, envisaged at the end of December. 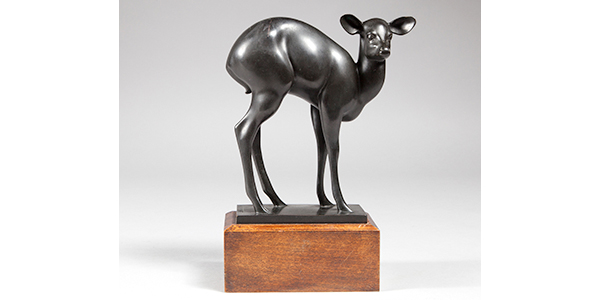 An "Antelope round back" was sold at auction 18.500€ (except expenses 25%) the 11/30/2015 by APONEM (http://www.aponem.com/).
Superb old bronze some according to the original plaster of 1928 to 32.
Patina brown dark moderate.
Base of origin in beech creates by the artist.
Signed on the terrace in the back.
Total height with base: 27.8 cm. Length: 20. Depth: 9.1 cm
Model similar represented page 39 in the reasoned catalogue of the artist by Liliane Colas. 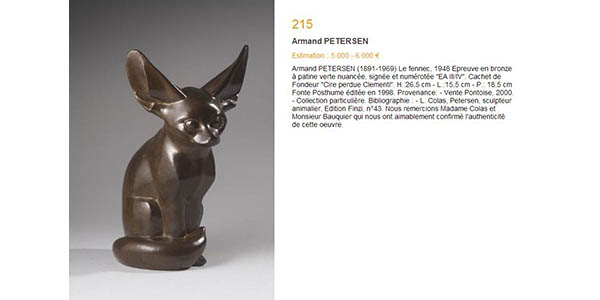 A "Ram head" on sale with Drouot 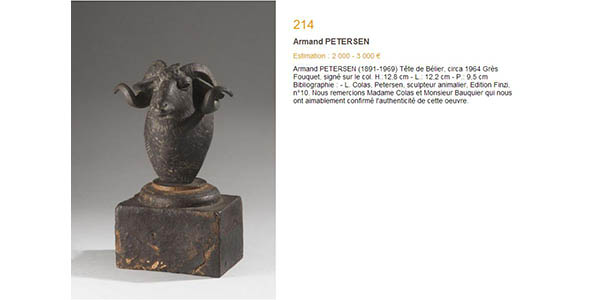 An "Antelope round back" on sale with Tradart Deauville 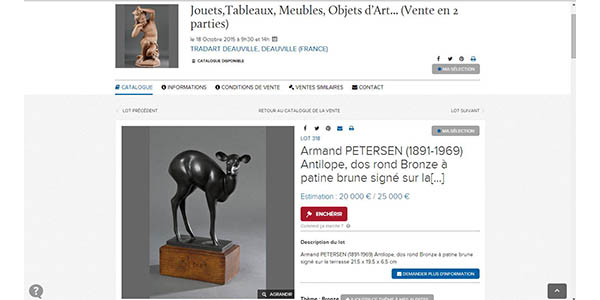 An Antelope round back, bronze with brown patina on sale at Tradart Deauville on October 18th, 2015.http://www.tradart-deauville.auction.fr/ 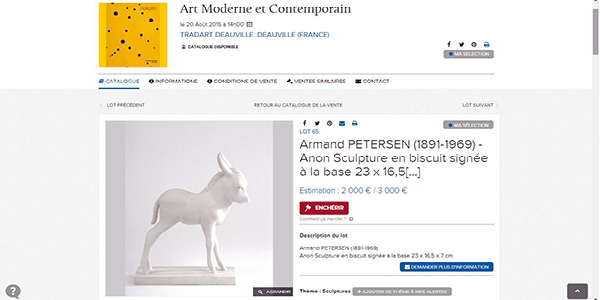 The Haddock of Africa (n°1 of the reasoned catalogue) out of white ceramics of the Manufacture of Sevres will be on sale at Tradart Deauville the 8/20/2015.
http://www.tradart-deauville.auction.fr/_fr/vente/futures/

A "Wild boar" on sale with the auction house Leclere 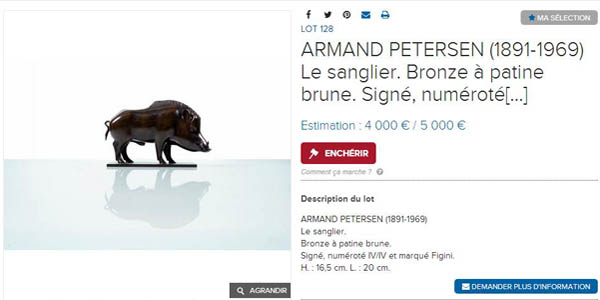 At the auction house LECLERE (Marseille) place will have on June 24th a sale catalogued and specialized in sculpture and bronzes in which a “Wild boar" will appear, sand casting of Figini sand with great finesse.

A new exhibition of the gallery Bruno Jansem

At the time of “Night Right Bank” of June 3rd, 2015 the gallery Bruno Jansem (18 Avenue Matignon, 75008 Paris) organizes an exposure entitled “the elephants”.
It presents a series of works around the animal in support for the WWF which works with the safeguarding of the endangered species. Two works of Petersen will be also present: the Haddock of Poitou and the Partridge.

In the living room of Mrs. Liliane Bettencourt two works of Armand Petersen are: the “Duck Nozzle in the neck” and the “Marabout”. This photo was published in the Paris-Match magazine in date from February 16th to February 25th, 2015.

The art gallery Bruno Jansem (18 Avenue Matignon, 75008 Paris) organized from April 03rd to May 10th, 2014 an exposure entitled “the artist and his model to the Botanical Garden”. It presented works of the animalist artists having attended this park and botanical garden between 1910 and 1950

The "Little Dromedary" Step 4 : The patina 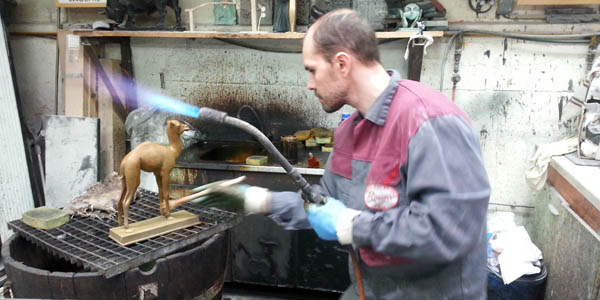 Last stage: the patina. Layer after layer the succession of the oxide passages will give it the desired final color.
See the video on Facebook https://www.facebook.com/armand.petersen.sculpteur

An "Antelope slept without horn" of the Manufacture of Sèvres 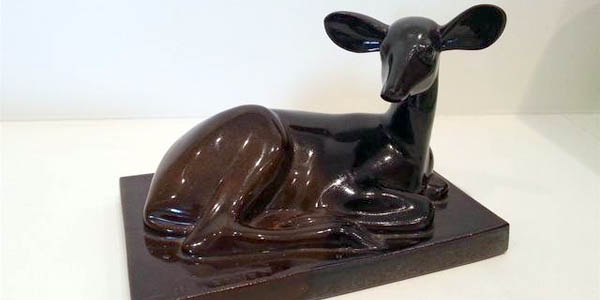 Antelope slept without horn, 1927 tender sandstone TEdition of the National Manufacture of Sevres. Registers A.Petersen. Carries the seal and the plugs WP High AR. 11 cm Historical: Realized according to the plaster model of 1927 preserved at the National Manufacture of Sevres, our specimen was published by Manufacture in 1930. Source: Particular collection, France Exposure: 1927, 1st exposure of the animalist artists, Gallery Brandt (another specimen) 1928, Living room of the decorators in Paris (another specimen) Bibliography: Petersen, Liliane Colas, Finzi Edition, model referred under the n°3 page 30 and reproduced page 31 (another specimen reproduced) We thank Mrs Sonia Banting for the City of ceramics - Sevres and Limoges for the assistance that it brought to us during the drafting of this note.

An "Antelope Lying without horns" of the "Manufacture of Sevres” 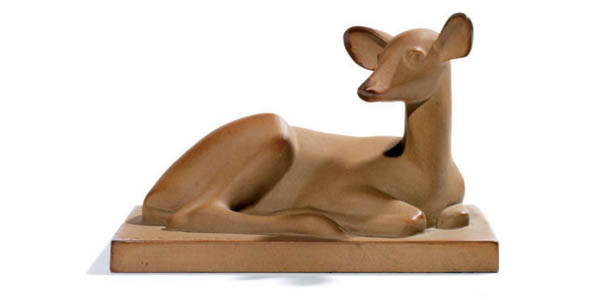 (An "Antelope Lying without horns" of the "Manufacture of Sevres”)

Antelope slept without horn, 1927
Tender sandstone edition
Edition of time of the National Manufacture of Sevres
Registered “A.Petersen”
Carry the Sevres seal and the plugs WP LR and a seal ml H.: 11 cm approx.
Source: Particular collection, France
History:
Realized according to the plaster model of 1927 preserved at the National Manufacture of Sevres, our specimen was published by Manufacture between 1929 and 1939.
Exposure: 1927, 1st exposure of the animalist artists, Gallery Brandt (another specimen) 1928, Living room of the decorators in Paris (another specimen)
Bibliography: Petersen, Liliane Colas, Finzi Edition, model referred under the n°3 page 30 and reproduced page 31 (another specimen reproduced) 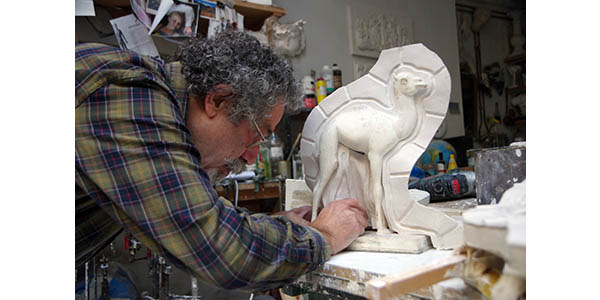 You wish to follow the birth for the first time of the “Small Dromedary”, ever melted of the time of Petersen, then consult the photo album which is entirely dedicated to him. Today Stage 1 - the moulding

The birth of the "Little Dromedary" 1/8 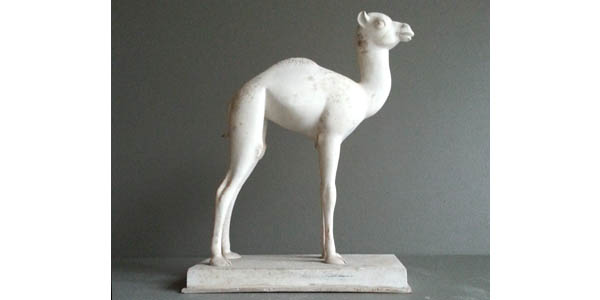 A big first! It is the first time that the “Small Dromedary” (n° 39 of the catalogue raisonné) is born never molten of living on the sculptor. It will be thus the n° 1/8 and it is the Foundry of Art ROSINI Paris (www.fonderierosini.com) which was selected for the quality of its bronzes for the realization of this work.

Rigged out of the adjective “Small” this dromedary is not it therefore considering it measures 34 cms top and 27 cms length.

This dromedary, baby, are presented in the form of young animals which the sculptor is fond of, of which it is made a speciality. It is drawn up, on him, proudly camped on its tended legs, does not outline any intention of walk. The head is humorous, the half-opened lips. This dromedary is in the vein of the LAMA, works succeeded in 1938, but less stylized. It was entirely carried out in Nogent before 1959. 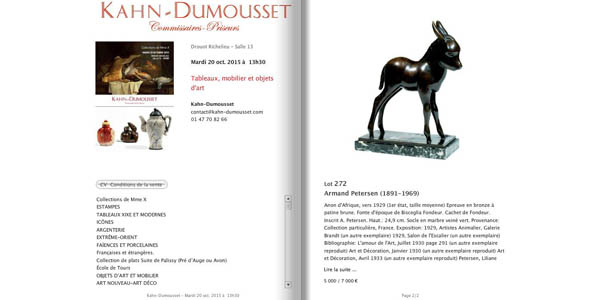 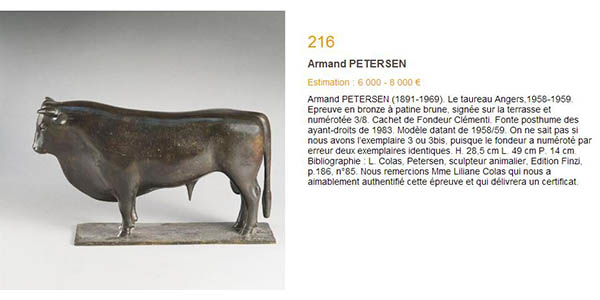 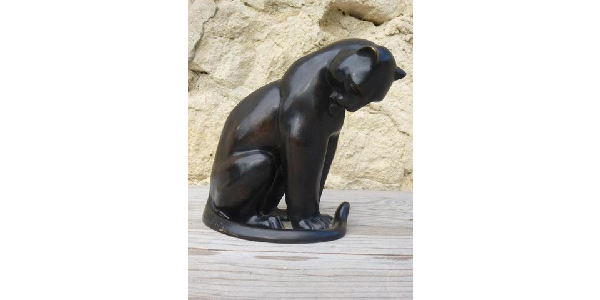 A “panther licking itself” published by the foundry Susse was sold the 8/23/2015 with the auction-room of Deauville.

An "Haddock of Africa" of the "Manufacture de Sèvres" 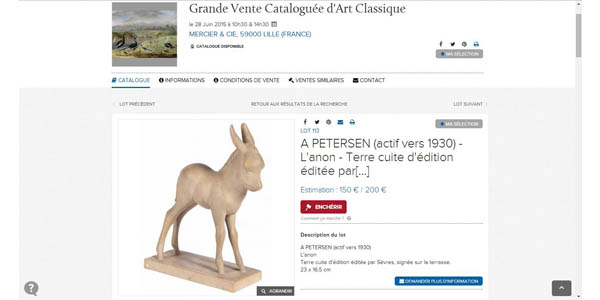 The Haddock of Africa (n°1 of the catalogue raisonné) out of sandstone of the Manufacture of Sevres will be on sale with the auction house of Lille the 6/28/2015.

A Panther and a Fennec with Tajan 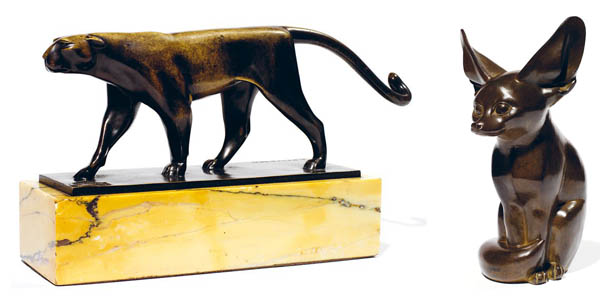 Yesterday May 27th, 2015, the rightholders and Liliane Colas (expert U.F.E Petersen-Pompom) validated in the offices of Tajan a cast iron old SIOT “Panther horizontal tail” as well as a cast iron post-mortem of the “Fennec”.

An “Antelope round back” on sale in Drouot

On April 15th, 2015 with Drouot a “Antelope round back” cast iron old was put on sale. It was examined, in the Auctioneer Jean-Marc Delvaux, by L. Colas and representing it beneficiary of the sculptor. There is no seal of caster.

This new website wants to be not only one window of works of the sculptor but also he will in fact to promote and make known with the professionals of art all the news around Armand Petersen, in particular the exhibitions presenting his works, the auctions and especially the new editions. Do not hesitate to contact us for any information which you would wish to know or to announce to us.